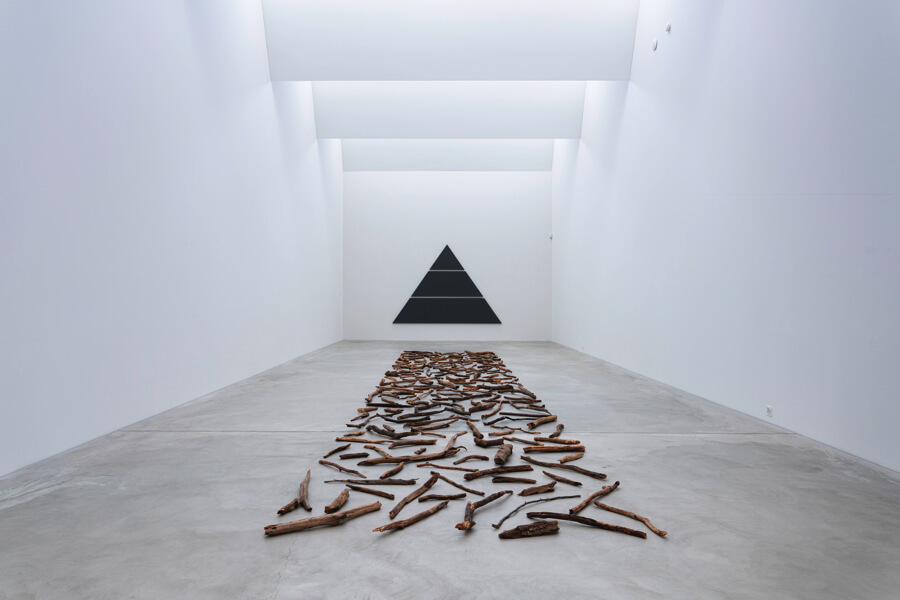 Alan Charlton (*1948) and Richard Long (*1945) are among the most outstanding British artists of recent decades. Long is regarded as one of the pioneers of so-called Land Art, an art movement which since the 1960s has understood landscape as a space for work, exhibition and experience. Based on his final year project A Line Made by Walking, he developed a comprehensive oeuvre that deals with walking in nature and its reflection. Alan Charlton, on the other hand, is one of the most radical painters of his epoch. He describes himself as the man who creates gray paintings. Since 1967, when he too, at the end of his studies at the Royal Academy of Art, exhibited a grey monochrome canvas, completely surprisingly and contrary to the teachings of the university, he has painted all his pictures in variations of this color or non-color without exception. Perception and spatial experience are central to his work.
The collector couple Agnes and Frits Becht built up a comprehensive collection of contemporary art in the Netherlands in the 1960s and 1970s. Frits Becht saw himself as an art promoter and mediator; he acquired the works of emerging artists at the time of their creation. With a keen sense of current trends, the currents known today as Land Art, Minimal Art, Conceptual Art and Arte Povera were at the center of his interest. The permanent loan of selected works of art from the Becht Collection ideally complements the collections at the Kunst Museum Winterthur and now enables a comprehensive exhibition of rarely seen works by Alan Charlton and Richard Long. Together, the works of the two artists unfold a subject of the most important issues in the art of their epoch: the search for new possibilities for art without an academic foundation or institutional constraints. Even from today’s perspective, their works have lost none of their presence and poetic power.