Hurricanes and Other Catastrophes 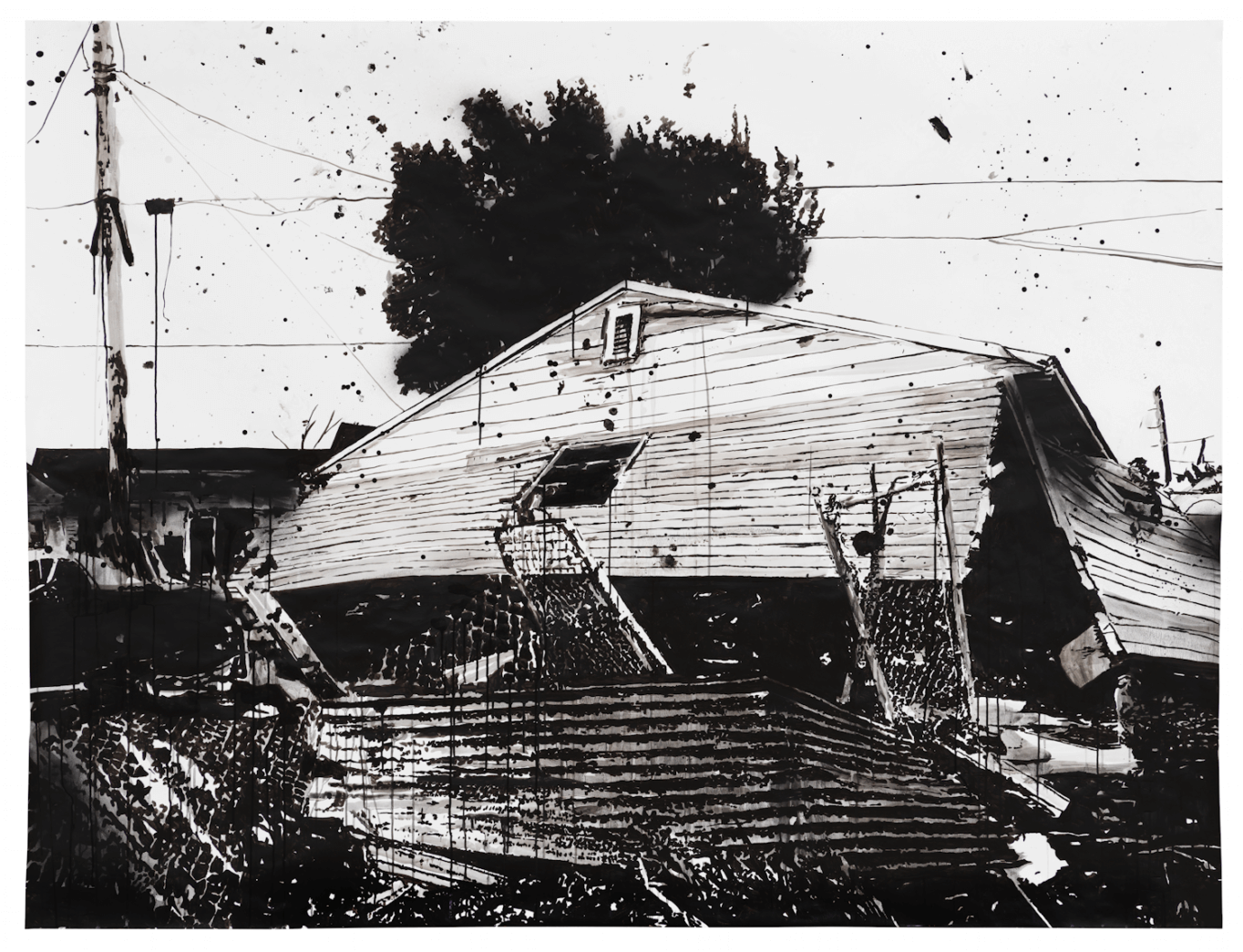 In collaboration with the Kunsthaus Graz, the Kunst Museum Winterthur will publish an extensive publication on the subject of buildings in Monica Bonvicini’s work over the past twenty-five years, to be published by König Publisher.

The socially controversial oeuvre of multimedia artist Monica Bonvicini (b. 1965 in Venice) includes videos, performance, photography, and drawing in addition to sculpture and installations. This exhibition at the Kunst Museum Winterthur is the artist’s first solo show to be held at a Swiss institution. Encompassing over sixty large-format drawings from the series Hurricanes and Other Catastrophes, the exhibit provides the first comprehensive overview of Bonvicini’s evocative work.

Bonvicini’s starting point for this impressive series was media coverage of destruction caused by forest fires or hurricanes, such as Katrina, the storm that devastated New Orleans in 2005. In the work, Bonvicini combines her ongoing examination of architecture—including her investigation of American suburban architecture and its social structures—with the spectacular images of natural catastrophes, a topic of great social and political relevance due to continued global warming. After all, it was particularly the poor sections of the city that were most heavily hit by Katrina. Since architecture as a vehicle for ideologies and social power structures has been Bonvicini’s focus to date, the drawings from the series Hurricanes and Other Catastrophes are not only impressive as representations of natural catastrophes, but also subtly reflect on cities as places of social segregation, the immediate consequences of climate change, and the political decisions that shape architecture and urban planning.

Colin Lang comments, “Bonvicini’s tempera drips down the surface of the images between the sharp vanishing points of the photographic source material, paint applied so thickly in places that it seems to ooze out of the small windows in the collapsed wall of the Beauregard House, making the nature of the collapse both graphic and formal—a horrible fact that achieves a congruence through the linking of the conditions of seeing and being shown with the object itself. Looking also means ‘falling in.’” The author concludes: “In addition, the effect of the collective viewing of these drawings is intimate, even overwhelming and upsetting, creating a pathos that would be difficult to elicit in any other way.” (Colin Lang, “Endangered Elements,” from the exhibition catalogue HOT LIKE HELL, 2021)

Since the mid-1980s, Bonvicini has been creating a broad range of drawings: sketches, designs, and concepts for sculptural works as well as autonomous large-format drawings with vivid qualities. In the series Hurricanes and Other Catastrophes, Bonvicini continues to examine her characteristic subject matter while employing her virtuosic skills of draftsmanship. Rendered in black and white, allowing the artist to explore the possibilities of the medium of drawing, she combines a rather matter-of-fact description of destruction with expressive gestures and fluid shading. Bonvicini mixes traditional tempera paint with the toxic-black haze of spray paint, the medium of street culture par excellence.

The Kunst Museum Winterthur presents over sixty large-format drawings from the series, which is on display for the first time. Created over the past fourteen years, the sheets demonstrate the extraordinary importance of drawing in Bonvicini’s work: “Drawing becomes a medium in which contemporary events exist; the drawing of spaces and architecture, which in terms of function and illusion was long ago replaced by other media, is a carrier of the physical and linguistic, and it is the connection between what exists and how it makes us feel.” (Susanne Tietz)

In addition to the subject matter already mentioned, the exhibition also presents a selection of sculptural works.

Monica Bonvicini was born in Venice, studied in Berlin and Los Angeles, and has been based in Berlin for many years. Her work has been included in numerous solo and group exhibitions, including the biennials of São Paulo, Istanbul, Berlin, and Venice. Bonvicini has been the recipient of many prizes, including the Golden Lion in 2009 and most recently the Oskar Kokoschka Award, the Austrian national prize for the visual arts. She taught sculpture, installation, and performative architecture at the Academy of Fine Arts in Vienna for twenty years, and now also teaches at the University of the Arts in Berlin.